It gives me great pleasure to announce that Microsoft has awarded me with an MVP recognition once again in the Visual C++ category. This is my tenth consecutive time as an MVP award recipient. Wow!!! Who woulda have imagined, MVP award recipient for a decade 🙂 I am thrilled and excited about this, because it is hard to be awarded for the first time even harder to continue being awarded the following years. Before, I continue writing this blog post I would like to thank God and his son Jesus in the first place, Microsoft for valuing and appreciating my time, effort and contributions, Developer community because you are the reason for the MVP program to exist, and by helping you I help myself , hence the insatiable appetite for knowledge and ideas sharing is always there… Thank-you all!!! 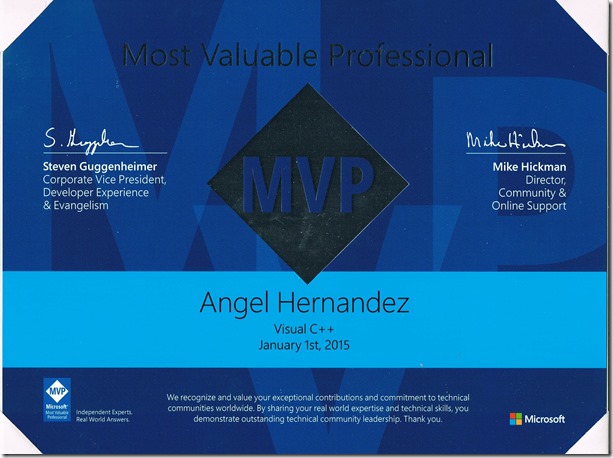 In this opportunity, I will not say or mention how awesome or powerful C++ is because you must know it already, what I would love to do though is to reflect on the past 10 years as an MVP, how the program has helped lots of people (including me) and what lies ahead with native code and C++.

The first time I ever gave a talk was back in 2002 for the Visual FoxPro community in my home country, then I started to present for the MUG communities all along South America. To me, communities represented my playground, a place where I could talk in “Geek” language, share experiences with peers and learn, at the same time it helped me to get rid of my introvert-self… Yes, I was an introvert but the need to present helped me overcome it and I became an extrovert.

To me being an MVP is more important than any recognition, because it is about my contributions towards society as an individual, a good example of this is how my inputs and comments are taken into consideration by the evolution working group of the ISO committee (C++ Language). Some people ask me about whether I get paid by Microsoft or why haven’t I joined Microsoft and similar questions. My answer pretty much is the same… I rather be an independent vendor and/or consultant who enjoys doing research, learning and sharing my experiences. It is more fun, trust me.

I used to spend a lot of time in forums and newsgroups (long before Stackoverflow even existed) and NNTP was the only channel available to seek and provide help. In recent years, I have been the kind of “blogging” dude instead of being in forums, reason being is that like everything in life, it was one stage I had to go through, learn from it and move on. I find blogging more interesting… Heaps more.

I must have been 16 when Microsoft released Microsoft C/C++ 7.0 (and it introduced MFC 1.0) and I learned every book available about C and C++. In those days, I also experienced a bit of assembler, even when it was a great learning experience it could have been much better if someone like an MVP was available, but the MVP program was introduced a year later in 1993 and CompuServe was not available in my home country either.

20 something years have passed, and I am still passionate about C++ and programming in general like I was back in 1992 (to those wondering about my age, I am 38 years old as I type this – 1976 model, and I have dedicated my life to computers since age 12).

Moving on… What lies ahead for native code and C++… Interesting question, and I will try to be nonbiased on this one. C++ has been evolving since its conception and the language has become better and better, but not only the language itself but the tools. Native code has not gone anywhere, it has always been there (if you have a PC, Mac, Mobile device, etc. whatever the OS is running, it is native). Managed languages are great for RAD and common development tasks, but if you want to have full access to hardware, bare metal and be in control of your program and how it behaves, then native code and C++ is the way to go.

C and C++ were one of the first portable languages (long before any VM, CLR or similar) and they will always be in demand. Mobility is considered by many the new computing wave, and as a developer if you want to make the most of your device battery, well, C++ is the right choice which by the way, in Visual Studio 2015 will allow cross-platform development, so as you can all see. C++ and native code are here to stay.

Once again thank-you all and I look forward to contributing to community this year 2015.